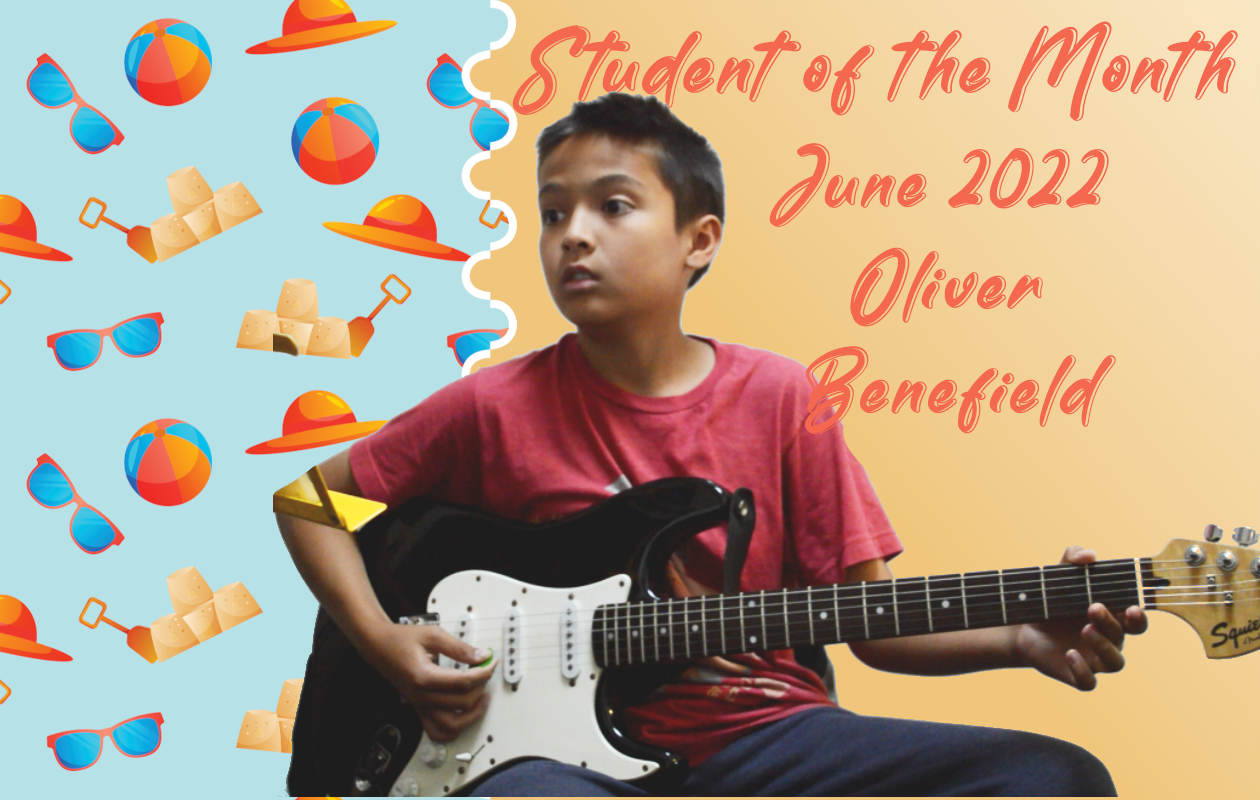 Oliver started taking guitar lessons at SMMC in 2018. He originally started learning the instrument on a nylon string guitar and started guitar lessons at a young age. The guitar is well suited for young beginners. As noted in one of our recent blog articles, it’s one of the top 3 instruments we generally recommend for young music students. For young beginners, the biggest hurdle to learning the guitar is mechanics. Guitar students must learn to operate the left and right hand in completely different ways. Yet, the hands need to be synchronized in order to be able to play the instrument. Once beginners achieve this coordination, they are able to play simple melodies.

In His Teacher’s Words

Oliver’s guitar instructor is Mr. Jason who has been teaching for a number of years at SMMC. Mr. Jason was recently featured in our “Instagram Live” series where he performed original music for guitar. You can check out that performance by clicking HERE! Mr. Jason notes: “Oliver has always attended his lessons with the utmost attention and interest. From early on, Oliver has shown an eagerness to learn the material that is taught to him. He puts his best foot forward and does not get frustrated when things don’t come right away. He also has an eclectic taste in music. We’ve worked on everything from reading music to writing music, improvising and learning different styles. Recently he’s had an much progress in his music reading and performance aptitude. I’m very proud of his accomplishments and look forward to continuing to work with him in the months to come.”

As you can tell from the video, Oliver now plays on an electric guitar instead of a nylon string guitar. Many young beginners aspire to play on electric guitar, but it’s not always the right option. It’s generally better to hold off on buying an electric until the student has made a good amount of progress or has outgrown a youth sized guitar. Electric guitars are better suited for students aged 12 and up, so if your child is younger, we recommend sticking with and acoustic guitar to start.

Oliver During His Lesson

We asked Marcus a few questions to learn a little bit more about our award winner. Here is what he had to say:

1. How long have you been playing your instrument and what do you like most about playing it?

I have been playing guitar for about three years. I love that I can play songs I hear at church, on the radio or that my grandma listened to growing up.

2. How do you make time to practice in your busy schedule? How often do you try to practice your instrument?

Playing the guitar is a way that I relax. It’s fun, so it’s not too difficult to make time. Usually when I listen to music, I wanna pick up my guitar and play along to the song.

3. If any, who are some of the artists you look up to for your instrument? Why do you like them?

I admire Jack White and Dan Auerbach (from the white stripes and the black keys). But I also really enjoy the music of Elvis, Frank Sinatra and The Beatles. Their music is just so good and they’re very talented.

4. What song do you know how to play that is really fun for you and why?

I really enjoyed playing Blitzkrieg Bop by The Ramones because it’s so fast, exciting and energetic.

5. What song do you aspire/hope to be able to play someday?

I hope to learn to play the Rain Song by Led Zeppelin soon.

6. What are some things you like to do just for fun?

I like to play sports, go camping or play board games and video games with my family.

Those are some cool answers Oliver. Thanks for sharing!

Jason Golday studied Jazz and Classical Guitar at Indiana University in Bloomington. He Received a BM in Performance. Later, he attended California Institute of the Arts where her received his MFA in Jazz Guitar Performance from. Jason has over fifteen years of public and private teaching experience including middle school, high school and conservatories. Jason is involved in several Los Angeles music projects and frequently performs in diverse venues. He has played at The Echo and Satellite to The Santa Barbara Museum of Contemporary Art and The Hammer Museum. Along with performing, Jason composes music for commercials, short films and silent films.